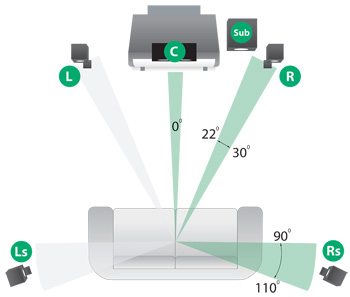 Q. I have a Dolby Digital/dts A/V receiver but I don't hear any surround effects when I receive High-Definition TV programs from my satellite tuner. And when I play DVDs, I also feel there should be better surround effects. I thought Dolby Digital is supposed to be a big improvement. What gives? — R.H.

A. There are two issues here. In your case, you are assuming that every HD satellite broadcast will be in Dolby Digital 5.1-channel surround, and that is not always the case. It's true that “Dolby Digital” (DD) is the audio standard that's specified for HDTV, but broadcasters may choose from several Dolby Digital flavors: Just because it says “Dolby Digital” does not mean that a soundtrack is broadcast in 5.1 channels. There is also Dolby Digital 2.0, which means you will get digital sound but only in 2-channel stereo. Plenty of older movies or programs that were mixed in 2-channel stereo may be broadcast on HD channels in Dolby Digital 2.0. If your A/V receiver is properly configured, it will indicate that and let you switch to Dolby Digital/Dolby Pro LogicII, which will simulate a 5.1-channel surround format from the DD 2.0 soundtrack. Note that if the DD signal the receiver detects is Dolby Digital 2.0, the receiver may automatically default to “Dolby Digital + Dolby Pro LogicII” without your having to select it (my H/K A/V receiver does that automatically). If you press the Dolby Digital button on the remote, you can switch to DD 2.0 if you want, but you lose the surround channels and the center.

I ran a cursory check of HD broadcast channels I receive from Time-Warner's Digital Cable service and some were in DD5.1, others in DD2.0. Surprisingly, most of the High DefinitionTV sports broadcasts of basketball and football games are in Dolby Digital 5.1, even repeat HD broadcasts of recent games on InHD. Most DiscoveryHD programs are also in DD 5.1. An older movie on Showcase HD was in DD2.0, but some current drama series (“Charmed”) was in DD5.1, as was a movie on HBO-HD.

If the HD broadcast truly has a DD 5.1-channel digital soundtrack, your receiver will detect a digital “flag” in the data stream and automatically switch to the Dolby Digital 5.1 mode. Your front-panel receiver readout or on-screen menu will say that and it will not let you change the surround format. (This assumes you are using an optical or coaxial digital audio connection from your HD tuner or your DVD player to your receiver. If you use only an analog stereo connection, the A/V receiver will replay the soundtrack in Dolby Pro LogicII or dts Neo6, or Logic7 if you prefer.) Be sure you select the correct digital audio input (optical or coaxial) for whichever source you are watching. Note also that dts is not part of the HD broadcast standard; you will get dts only from DVDs and dedicated dts multichannel discs, not from digital TV broadcasts. And dts is an optional soundtrack format; it is not a requirement on a DVD.

When you play a DVD, go to the DVD menu for your player, and click on Audio Setup or soundtrack preferences (sometimes you may have to click on “Languages” to get to the audio setup). You will have a choice of selecting Dolby Digital stereo or DD5.1, and in some cases, dts. Most DVD players will default to the stereo mode unless you select “Dolby Surround” or Dolby Digital 5.1. Now you can get ready to actually hear surround effects!