Axiom Home Page
Looking to consolidate and simplify. I use DBPower Amp to rip CD's. I have it set to perform a dual rip where it rips the CD to FLAC and MP3 simultaneously and drops both files into two different locations. I use FLAC for my home audio system, and MP3 for my vehicles. I just copy the MP3 files onto a USB drive.

DB PowerAmp isn't very user freindly and not a great music player. I just started using it because I want the best possible FLAC files I can get, and it does that well.

I hate I-tunes. I don't like how it makes me do things. But I can't stand those stupid water faucets that make you wave your hands frantically to keep the water on either.

If I have to fix tags, I use Foobar 2000. That seems to be the quickest, simplest software I've found for that.

I have tried Media Monkey for creating a playlist and fixing files, but it's slow and clunky, and I just don't like it.

Is there another music program I should try?
I still really like EZ CD Audio Converter (formerly Easy CD-DA Extractor). My needs aren't as advanced as yours, but it's pretty intuitive for the functions I use, and I do have to occasionally update metadata. I'm not sure about a dual-rip option.
Oh, but I do use Media Monkey for playback. However, I don't get that involved with my playlist creation. I tend to just keep my most recent purchases in rotation until I've digested them, and then I transfer the tracks I like the most to my phone to listen at work. Since I have the Media Monkey app on my phone, I don't need to have both FLAC and MP3 versions of the songs. I just stick with FLAC.

Between EZ CD Audio Converter for all of the back-end stuff and Media Monkey for playback, I get what I need.
Thanks. EZ CD looks a lot like DB PowerAmp.
i just put a record on.
Do you mean you put on a wax cylinder or did you move out of the stone age and into the bronze age with a vinyl record?
Depends on my mood ,sometimes i get the stork to drop its beak on my hand carved stone records and the music comes out it ass.
You mean like this? 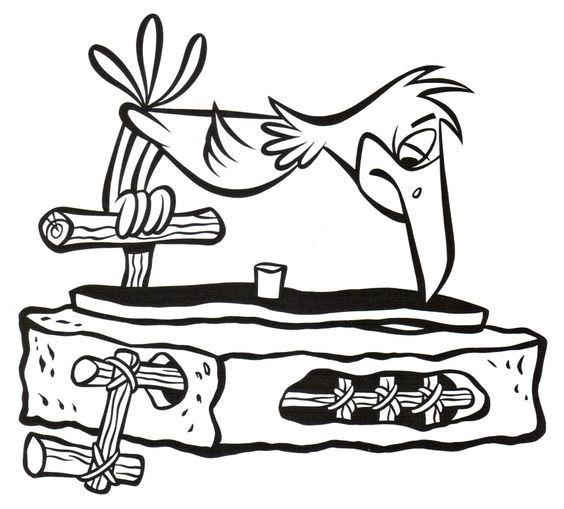 I like vinyl. Very analog. No 1s and 0s. Try an original pressing of Paris Texas and hear the music.
Im a vinyl guy all the way, Mojo just like's bustin my balls for some reason. Digital sounds too analytical to me, im glad we all have something that makes us happy . I love what digital did for movies for sure and its great in the car but just too much messing around to get to the music.All the organizing and cover art and track info and programs to play it and what work on iphone etc etc and everyone keeps saying they can make it better , just pull out an album and listen aaahhhhhh.
I think Mojo is just trying to wake this site up.

I agree with you GWN about digital. There is just some electronic curtain over digital music unless you have an excellent DAC and associated equipment.

Sound quality with vinyl is just better than CD even with a Sony CA9ES CD player.
SACDs through my tube amp to M2s + EP400s is my sonic nirvana.
No clicks, pops & stylus noise that I remember so well.

My new HG Rosewood M22V4s are finished & are shipping next week. It'll be nice to have them back in my HT system.

Happy Easter everyone. Daffodils are in full bloom out on the wet coast...

TAM
Records skip too much in my pickup. Roads in Alaska are not turntable friendly.
Many artists are also in the camp of vinyl only releases as of the last couple years.

Myself I find a lot of the C.D,s sound awful I've got 500 plus, when played through my M80s the imaging I used to get through headphones and H.T.I.B.s is totally lost or the music all sounds really separated. Comparable to a Les Paul track that wasn't layered properly, and you can hear the layers separated.

The same tracks on a record sound a lot more together, even with my more entry level table.

The last couple months I've been using Tidal which I've quite enjoyed so far. Half decent selection along with Hi res.
Somewhat limited to mainstream and more popular music, the sound quality is wonderful.

Brendo
Flipping the record while driving is troublesome but this works pretty good. 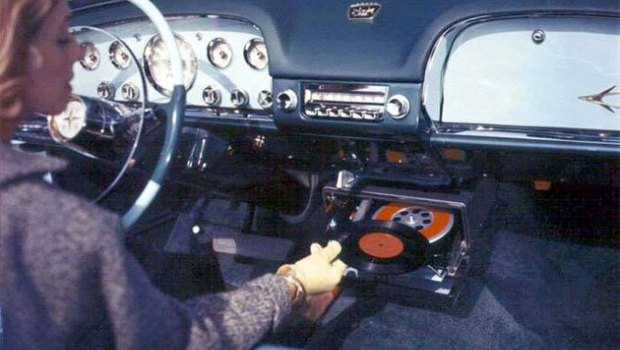 IMO, the quality of digital sound is totally dependent on how it was recorded & mixed.

I have a ton of CDs from their inception in the early 80s to the present. There was a long period where the mixing was often poor giving sound was horribly flat with no dynamic range. This is a shame since the CD format can do that so well.

I have a bunch of older CDs that sound like crap - cassette quality? I don't play them anymore; however, digital recordings that are mixed properly & with proper care are often stunningly good - lots of dynamic range, great sound stage & noiseless. For example, try any of Clapton's productions from the past decade - all are recorded & mixed properly & with care. Absolutely wonderful sound...

Is that a beautiful dashboard from a 1956 DeSoto?
I will try that, TAM.

I like SACD sound quality. Mussorgsky's Pictures at an Exhibition sounds spectacular in SACD.
Pretty much all my music is from the 80's and early 90's . i have picked up some sacd's that are remastered from that era and they sound much better than the cd's but still too analytical for lack of a better term.I am not saying im right just my preference and i do use both formats. I dislike all the syncing and digging to find the music i want when i can pull out an album at will. Also the ticks and pops are not a real problem once you get into some upscale equipment and cartridges have improved immensely. A LLoyds stereo was definetly riddled with ticks and pops. Seeing what people will spend on a high end DAC i have no problem spending 3 to 4 thousand on a TT and mabe a grand on a cartridge. When i go to a concert thats analouge and so thats what i want to hear at home.
I fail to understand how digital can be any more difficult than vinyl.

I use a raspberry pi with a dac hooked up via the USB. can search by artist name, album name, song name. I have over 600 albums sitting on a NAS and depending on what I want to listen to can find something within 10-15 seconds.

I new a DJ who had around the 600-800 albums. He has a whole room dedicated to storing them. It was a massive amount of space.

I bet GR8, that if you has someone ask you to play a random song from your album collection, it would take you quite a bit more time to find it (the album) and then to figure where it was on the platter, and get it queued up. How is that far more easy?
My TT back in the 70s was well above the 'LLoyds' fare. I had a higher end Dual TT with a nice cartridge that I immediately got rid of when CDs came on the scene.

Unless things have changed, it was easy to damage a record (clicks) just slipping it in & out of its jacket & that often would cause static build up (pops). Out would come my anti static gun & my anti static record cleaning cloth, ha!

Presently I don't use any fancy streaming or cloud stuff. When I want to listen to an album (or up to 5), I just put them into the tray of one of my 3 CD/SACD players - all take 5 discs - & press Play.

TAM
I jumped all over cd's when they came out and i thought they were great. But as time wore on i came realize they were all they were made out to be. Music label just wanted everyone to buy the same music all over again and most of the releases were terrible transfers. Then came the loudness wars which abused the abilities of digital to help make more record sales. Then all the shit about 48khz and 92 then 184 etc etc its all to just keep upselling the same music over and over. I can lay my hand on any record any time, and i dont always know what i want to listen too but i can thumb through my collection and something on the cover will strike a note with me and that will start my session. As i listen i will be reminded of other tunes and i will go get them and i will reflect on the album cover and think about the band or the artist none of which happens when i play a digital file. I didnt say you had to listen to vinyl i just said i prefer it. I listen to digital and i presume plenty of driver do too as they seem to like swerveing into my lane while browsing their playlists etc.

Check out Micheal Fremers website , analogue planet he has a video on there of him being interviewed and you will see he has thousands of records and can tell you about everyone of them , where they came from and where any particular one is and he is very emotional about all of them. No one gets like that over a digital file .
© Axiom Message Boards