Axiom Home Page
I'm pretty new to all this so I need a little advice on the placement of the subwoofer. I have just purchased a new samsung 75" 8000 series TV. Then I'm pairing it with the Axiom Epic 60.350 speaker system. I'm putting the TV on a three shelf open shelf stand that will be placed diagonally across a corner of the room. The M60 towers will be on either side of the TV and the VP150 center speaker will be directly below on the center shelf (surrounds out to the other corners of the room).
My question is on the subwoofer. Since the open shelf unit will sit diagonally, there is space behind the shelf unit to put the subwoofer and let the sound flow through the shelf unit. As an alternative, I can put the subwoofer to the side. Would putting the subwoofer behind the shelf unit significantly impair it's performance?
Thanks,
Jeff T.
Do you have a picture of the stand or something similar to help visualize? Will the sound be impacted vs a direct, unblocked setup? Yes, will it be terrible? Don't know, honestly, but the picture would be helpful to see how much bulk is there.

As a positive note, this is potentially more "doable" with a sub vs. with a regular speaker, so at least that is going for you.

The EP350 is front firing, so you generally want that as unobstructed as possible.
Putting it behind something might not be problematic at all.

BUT putting it in the CORNER of the room is likely to give you very different results than just putting it along a wall.

Really, there are too many variables to give you a qualitatively better answer than "try it in a few places and pick the one that sounds best to you".
Jeff, welcome to Axiom. What you propose shouldn't create a significant problem of obstruction. The sub will be placed below the screen and apparently partially below the VP150. The omnidirectional low bass frequencies will spread around partial blocks without appreciable loss of energy.

The corner location would give the strongest output for a single sub, but excites all the room modes and may not give the smoothest response. Although arrangements of two or more subs are available to smooth the bass response(e.g., one in the diagonally opposite corner), moving a single sub has limited room for improvement. One possibility for reducing some(but certainly not all)of the modes is to move it out of the corner 1/4th of the way toward the opposite side wall. You might also give this a try, but might find that the corner location is on balance the best.
Thanks for the reply Nick. Here is a pic of the shelf unit. 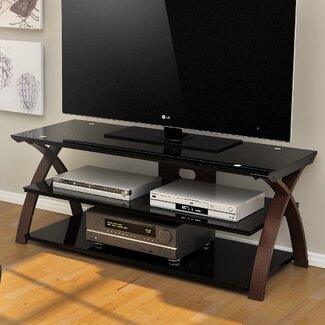 The more I look at it, I think the sub will be parially blocked by back secton of the stand and the AV unit.
Thanks Tom,
I think you might be right. I'll probably have to try it out in several places. There are a couple of places along the wall in front of the stand that I can try.
Thanks John, I think I'll take everyone's advice and try in two or three possible locations. I'll give the corner a try and then move it out along the side wall and see how it sounds there.
Having a sub behind a stand like that wouldn't worry me at all.

Edit: room interaction can be very important and very weird. I found that as little as 4-6" difference in distance toward boundaries made a pretty big difference in the bass at my listening position. Same thing with orientation of the driver; depending upon your aesthetic v. functional needs, rotating the sub 90 degrees might make a difference.
My best location happened to be at the middle of a side wall (either one), facing into the middle of the room.
© Axiom Message Boards