The most important aspect of acoustical engineering is the Double Blind Listen Test. This is where you find out if your theories have merit. When most people think of blind listen testing they probably think of comparisons to competitor products in the design cycle. While this does go on the overwhelming number of double blind listen tests are about specific experiments to gauge their audibility. It is through this plethora of small steps, and the odd big one, which we progress forward with the science of sound. 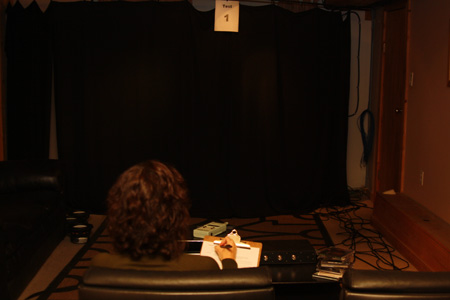 A listening test in progress in the Axiom Listening Room.

The basics for doing double blind listen testing are an acoustically transparent screen (we measured ours in the chamber to verify it's not changing the amplitude response), a switching system, a minimum six channels of amplification, a level adjuster for each switch position, a very high quality SPL (Sound Pressure Level) meter, and a score sheet. We built our own switcher with an IR remote control and our own level adjuster. Our system is also portable so we can do experiments in various rooms as understanding the room is a critical aspect.

The protocol for an Axiom double blind listen test is to do them one person at a time and leave the volume control and the music selection completely up to the tester. Our score sheet contains large sections for notes on each A, B, and C. We encourage a large number of notes to be made during the listening section. These notes tell the designer much more about the test than just the raw scores.

Currently we are building another listening room that will be equipped with a spinning mechanism that will hold the loudspeakers under test. This will allow the speaker position to remain constant during the testing as the spinning mechanism will move each speaker under test to the position of the last one each time you hit the A/B/C switch. Currently we have to run tests twice in order to eliminate the difference of the loudspeaker position from the results.