Axiom Home Page
Sad news, she was definitely a fixture during the disco days. I liked her music.

She was very nice to deal with, though once someone pointed out that I made it look like she was holding her boob, I never looked at this image the same way again!

Now I want to by my wife a push-up bra shaped like cupped hands.

Originally Posted By: pmbuko
Now I want to by my wife a push-up bra shaped like cupped hands.


You mean - Now I want to cup my hands on my wife in the shape of a push-up bra?

When my wife and I first started dating, we would sometimes frequent a local disco. We truly loved dancing to Donna Summers music.

When my wife and I first started dating, we would sometimes frequent a local disco. We truly loved dancing to Donna Summer's music.

Just so everyone knows, when Gary and his wife first started dating, they would sometimes frequent a local disco. They truly loved dancing to Donna Summer's music.

I could have my #'s wrong on this, but, just as John has the arrival thing covered, it appears thath RickF has it goin' awn for the departures. If someone has time today, could you please check all the RIP posts and see if I'm correct or not? Thanks.

I confess to loving a lot of old disco music. It used to be fashionable for "hip" people to put down disco, but I always defended it. Highly melodic, great rhythmic drive. Sad news indeed about Donna Summer.

Early this morning, I came across one of those TV marketing channels pushing a Time-Life 8-CD set of disco for "six easy payments of $26." I almost went for it. Eight CDs of disco is perhaps more than I want, however. Some of the old video excerpts of disco performers were great, including one of Leo Sayer, "You Make Me Feel Like Dancin'".

FINALLY!!! This explains why I heard "Stayin Alive" in my head every time I watched Alan strut up and down Ian's dock at the Axiom Anniversary Bash.

LOL! Next party on Ian's dock will include a "disco moment."

I love disco unashamedly. Donna's "I feel Love" was a game changer. And EVERYONE dipped their toes into the disco waters. Pink Floyd- Another Brick In the Wall, The Grateful Dead,-Shakedown Street, Rolling Stones-Emotional Rescue.

I may have my story mixed up a little...but I think it was live aid (the first one) and they did not let the BeeGees have a sound check because they were the BeeGees. They were pissed but went out and blew the roof off of the place. Everyone else sucked with the exception of Freddy Mercury and the rest of Queen who put on a performance of a lifetime. Radio Ga Ga indeed!

Alan, you need a new avatar: 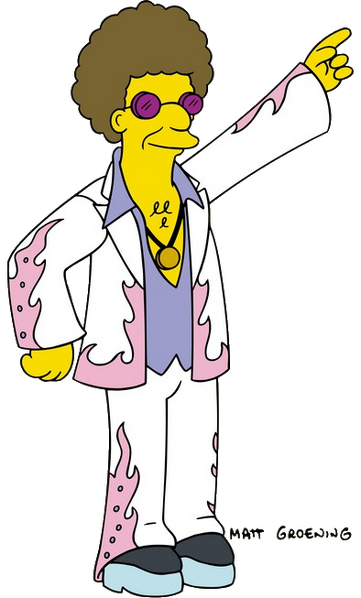 Leasure Suit Alan, the next generation from Larry.

Excellent.
Cue up "I Will Survive".

Randy, I actually owned a leisure suit, a rather elegant one at that, if memory serves. . .

Never the medallion, however. Or gold chains, which were considered vulgar by Ontario WASP culture.

Alan Lofft: a man of many dimensions.

Some of them horrifying.

MarkSJohnson Just so everyone knows, when Gary and his wife first started dating, they would sometimes frequent a local disco. They truly loved dancing to Donna Summer's music.


Sorry for the double post. Just trying to be grammatically correct, I made a change then resubmitted thinking it would re-write over it. Thanks Mark for being such a good thread watch dog. @#$%&*!

Did anyone have, or will admit to having, a 1970's pair of men's platforms?

She Works Hard was a great record. The last cut had an amazing choral bit that I used over and over again when auditioning equipment to buy. Plus, I always support the homies, except Godsmack.