Location, location, location. It's the mantra of real estate agents, and it could just as easily apply to your Center Channel. Why? Because moving a speaker any speaker--but especially a center-channel speaker, up, down, left or right, may significantly alter its sound. It's very dependent on your particular setup, the room itself, the TV and the center-channel location relative to the TV, the distance from the wall behind, and any shelving in close proximity.

The tonal changes that occur are generally insignificant but in some unique cases they can be quite audible. A large number of enthusiasts don't recognize this, and tend to blame the speaker for any tonal differences that in fact may result from the interaction of the speaker with the room, the face of the TV picture tube or screen, or nearby surfaces.

The VP100, pictured in Boston Cherry

Several interesting emails from Axiom owners got me experimenting with this phenomenon. Knowing that the tonal balance between either a VP100, VP150 or the VP180 is excellent with our front-channel bookshelf and floor-standing models, I decided to put the matter to a test and try to find an undesirable location for the center channel. The good news is that a bit of fiddling with center speaker placement can restore the tonal balance if you should detect any imbalance between your VP100, VP150 or VP180 and your Axiom main speakers.

To document how center-channel tonal balance changes with different locations, I set up an experiment using an A/B comparator and my trusty sound-level meter, doing listening comparisons with the Axiom VP100, VP150 and VP180. I was also interested in discovering whether certain center-channel positions sounded more natural or better than other positions.

The results are fascinating: Changing the center-channel location will certainly determine how neutral or transparent your center channel loudspeaker will sound, and how well it will tonally blend with your main left and right speakers.

The VP150, pictured in Black Oak

(During this discussion, you should keep the following in mind: Moving any speaker will alter its perceived tonal balance relative to where you are sitting. This has been scientifically documented and supported by data gathered in tests conducted over many years at the National Research Council (NRC) in Ottawa, Canada, the facility where Axiom continues to measure and audition initial speaker prototypes. There, every speaker is auditioned in four different locations, and each listener rotates listening chairs, so by day's end, all listeners have heard each speaker in four different positions and from at least four different seating locations.)

In my first test, I connected the Axiom VP100 and VP150, placed on a 16-inch stand well out from my TV monitor, one center beneath the other. All the tests were done with both M80ti's and M22ti's as the main left and right speakers. With the loudness levels perfectly equalized, I switched between them using pink noise, movie dialog (male and female) and a variety of different music, with an emphasis on vocals. I also switched to pure stereo to compare the tonal quality of the vocals in stereo against the same signals through the VP100 and VP150. The similarity between the two was astonishing. I could barely distinguish them except for a slightly fuller sound from the VP150.

I put the VP150 on top of my TV monitor and left the VP100 on the stand in front of the TV. Now the two centers sounded quite different from each other, and the tonal differences remained when I exchanged the positions of the two speakers. Was it just the location that produced these different tonal balances and the different location relative to my ears? 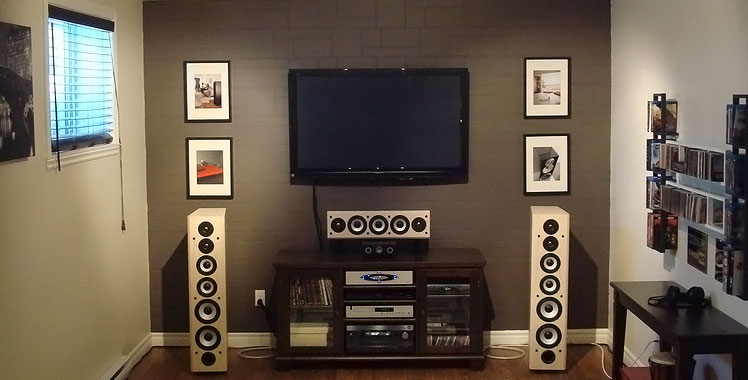 The lesson in all this is that if you detect noticeable tonal differences between your VP100 or VP150 and the main left and right speakers and you find those differences audible or distracting then it's time to experiment with placement. Try different locations, even sliding the speaker slightly to the left or right on top of the TV monitor, even if it isn't exactly symmetrical. Some Axiomites have found great success putting the center almost on the floor or on a short stand with the center angled up towards the listening area.

For improved center channel sound coverage or use with a large screen and a front projector, try two center channel speakers, one above and one below the screen. That way, for most viewers, the two centers running in parallel will image the dialog in the center of the screen, rather than too far above or below the screen. This dual center-channel formation will also reduce the effect of the location on the tonal balance.